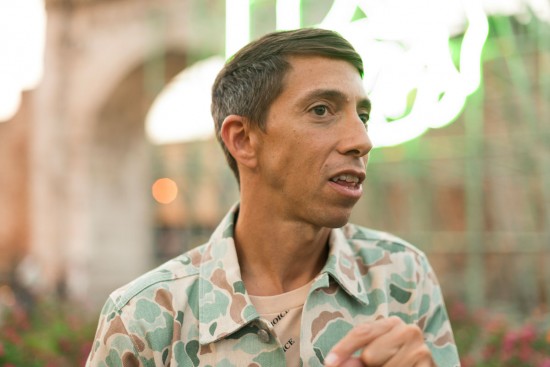 Patrick Tuttofuoco was born in Milan, 1974. Lives and works in Milan. His practice is conceived as a dialogue between individuals and their ability to transform the environment they inhabit, by exploring notions of community and social integration in order to combine immediate sensorial allure with the power to trigger profound theoretical responses. Tuttofuoco melds Modernism and Pop; he presses figuration into abstraction, using man as the paradigm of existence, as the matrix and measuring unit of reality. From this interpretative and cognitive process, infinite versions of man and the context of his existence are produced, from which shapes able to animate the sculptures are generated.
Patrick Tuttofuoco participated in the 50th Venice Biennale (2003), Manifesta 5 (2004), the 6th Shanghai Biennale (2006) and the 10th Havana Biennal (2009). His works has been exhibited in several institutions such as Fondazione Sandretto Re Rebaudengo, Turin (2006), the Künstlerhaus Bethanien, Berlin (2008), HangarBicocca, Milan (2015), OGR, Grandi Officine Riparazioni, Turin (2017), Casa Italia, Pyeongchang (2018) and Maxxi, Rome (2018). In 2017 it was selected by the Italian Council announcement with the ZERO project presented in Rimini, Berlin and Bologna (2018).

I Do di Patrick Tuttofuoco